If you need to stay awake

Well, 51st (as Lowell likes to call the new guy after the movie "Fifty First Dates") did not move in today as was expected. Some paperwork glitch and apparently he'll come tomorrow. I'm betting he wasn't too disappointed though. Chances are really good he didn't even remember that today was the big day.

So all going on today was the normal terrorizing that we get. Tonight, the chef came downstairs, went into the garage, grabbed a propane tank and demanded to go get it filled. Never quite knowing what is going on in his mind, Lowell responded with, "That's a great idea. We all love to grill out, but I will need to talk to my supervisor tomorrow to see what the protocol is for this." Clearly, this was not an acceptable answer. He wanted his propane and wanted it then. But serious questions in our minds gave us pause about whether or not this was okay. He claims to have had the grill for two years and never having any propane. (Thinking there has to be a reason for that.) And since it is his grill, shouldn't he have to pay for the propane?

Anyway, when presented with that, he grabs the propane tank, walks outside and sits down and kind of cradles the tank. I went outside to try to talk to him, but he refused to speak. So I came back inside and we just watched him hugging on the empty propane tank. He finally came back inside, slammed some doors, knocked some stuff around, and pulled the curtains off the wall. We just let him have his time.

Then he grabs the tank and goes back outside again. This time Lowell and I both went out to try to talk to him. He finally joined the discussion. He was very focused on the propane and couldn't see where we were going when we talked about respect and not being demanding. I mentioned that we are here to help him live successfully, but that we are not his personal taxi drivers, and he cannot just summon us to take him somewhere and pay for his purchases whenever the whim hits him. He explained that he only does this because he doesn't have a driver's license. (See where he is totally not getting it?)

So we go into several examples of how we should treat one another and be respectful. We are talking and he keeps interrupting about the propane, because we didn't understand, he wasn't being disrespectful, he just has wanted this propane for two years and nobody will get it for him and that makes him mad. Again we explained that even when we are mad, it's not good to yell at people, slam doors, hit walls, and pull the curtains down. "Oh the curtains?" he responds, "I pulled those down b 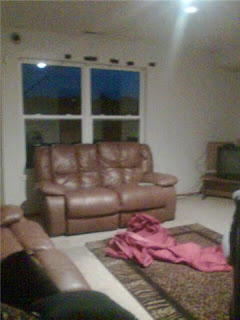 Well, I guess there is really no use arguing with that now is there? So much for caffeine, just pull the curtains down. Certain cure for sleepiness!
Posted by Queen of the Castle at 10:02 PM