Apparently, at our house, we think Independence Day is the day where we stand up for ourselves and our ability to exert our independence. Because that's what happened yesterday. And it wasn't fun.

The day started okay. And even up until around 6 pm, it was fine. Lowell and Joshua were headed to a party at a friend's house and I was going to hang with the guys. I even gave Lowell a big "now you go have a good time and don't worry about a thing here at the house because I have it all under control" speech before he left.

And then it happened. All hell broke loose.

So he took all that anger and turned it into, "I'm mad because you told me I have to wear a seat belt." It sounds silly I know. It's just a seat belt. But last night, it became oh so much more. So I sat in the van waiting for him to put on his seat belt while he yelled and cussed and hollered about how nowhere in the Bill of Rights does it say anything at all about wearing a seat belt. And on that exact note, I guess he was right. But I tried to counter with the whole rights vs. responsibilities argument. And I don't know why I even tried. I've never won it. He cannot comprehend it. Or at least he has made a firm choice not to.

So at the point where I was feeling like it might not be safe for me (and another resident) to remain in the van with this guy, I grab the keys and slide out. At this point Lowell has been gone maybe twenty minutes when I, ("Ms. I have it all together, don't worry about a thing"), call him and tell him to come home NOW, because I think the van may be about to blow up. Because apparently there is some game for the XBOX that tells you exactly how to hot-wire a car. So, by golly that was the plan. Hot-wire the van. Drive yourself to work. Sans seat belt.

It didn't work. However, he did somehow manage to cause the hazard lights to flash rapidly. This is what we were left with. 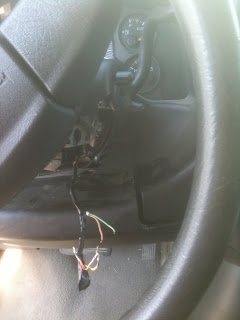 So then he jumps out of the van and runs down the street. I call my supervisor to let her know and she asks, "Will the van still start?" And I'm all, "Who knows, but I am not about to be the one to stick a key in the ignition right above the cut-and-dangling wires and try. Isn't that what our maintenance team is for?"

So I borrow a van from down the street (because, this was after all, the company's one spare van since ours is still in the shop due to the bean field incident.) And I take off after him. I tell him that if he wants a ride, he just has to buckle up. If not, we will follow him to work to make sure he gets there safely. Because, clearly, safety is our number one priority!

Lowell comes and trades off with me. It takes this guy an hour and forty minutes to get to work. So he has about an hour and a half left of his three hour shift.

I go pick Joshua up at the party and let Lowell handle the end-of-shift transportation. We were both thinking that this guy is tired and will get in the van without argument, buckle up and go home. We were both wrong.

Except this time after he cusses and yells and demands that his "rights" be met, he walks off in the opposite direction of home. So again Lowell follows behind. He follows for around thirty minutes until this guy starts picking up rocks threatening to throw them at the van if Lowell won't stop freaking following him around (I paraphrased that to keep it PG). Not wanting our home to be responsible for putting THREE vans in the shop, Lowell backs off a bit, and the guy completely ditches him. We call our supervisors, his dad, and the local police to file a missing persons report. Then ensues several hours of several people driving around searching for a guy who does not want to be found. And who most certainly does not want to wear a seat belt if and when he is found.

Four hours later, he comes home, heats up some leftover chicken nuggets, and heads to his room. We have no idea where he's been. We honestly don't really care. We again are on the phone with supervisors, parents, and the police. He's in bed, because he's "been up all night and is worn out."

This morning he came down to complain of a "killer blister" on the back of his heel. But other than the blister, all was well. No threats, no nothing. Just back to normal. Whatever that is.
Posted by Queen of the Castle at 2:23 PM No comments: