How To Irritate a Farmer

So we decided to take a couple of vacation days. We are here at the house and therefore, we are "first on call" if something happens. But this isn't really one of those houses where we can say we weren't worried about it because "nothing ever happens." This is more of a "something always happens" house.

So about 10:15 this morning, I get a call from the substitute working in our house that he's had a "little accident." He says that he "slid off the road a bit" and was "stuck in the mud." He's called the other supervisors and maintenance to give him a tow. Nobody is injured. I thank him for letting me know and go back to watching the Law & Order marathon.

About an hour later, this guy calls again saying the police need information on the client who was with him in the van. I tell him where to find all the information he needs and then I question him about the fact that they are still stuck "on the side of the road". He tells me that the tow truck hasn't arrived yet. Knowing that the particular client who is with him has the potential to completely freak out at any point now, I volunteer to go pick up the client while he is waiting for the tow.

So imagine my shock when I arrive to find two police cars and see our van here: 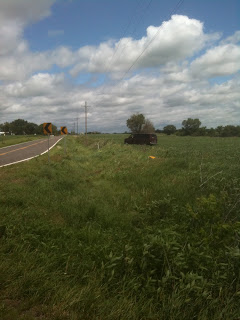 This was one of those times that reminded me of when you are young and a parent says, "Not telling the WHOLE truth is the same as telling a lie." Because, yes, the van was "off the road." But I think a better description would be, "The van is in a BEANFIELD." But maybe that's just me.

Truly now, how does that even happen?? So I talk to one of the officers. And I'm trying not to laugh at the absurdity that my employee somehow jumped the ditch and landed our van in the MIDDLE OF A BEANFIELD. And the officer just points out what a beautiful day it is and how he can only speculate about what may or may not have happened. He says he is waiting for the tow truck to get there because they will have to "shut down the road" to get the van out of the field.

So I begin the journey through the ditch, the mud and the beans to get to the van. When I get there, the staff tells me that he's really embarrassed. I couldn't figure out why really. I mean, don't we all park in the middle of beanfields every now and then?? And then he says, "I'm not sure what happened. I wasn't really speeding at all. I just couldn't slow down enough to make the turn."

And the only thought that screams its way through my head is: ISN'T THAT THE VERY DEFINITION OF SPEEDING???????

So I get the client and he and I traipse our way back through this beanfield. I'm trying to be careful not to step on the beans when I realize that my staff has driven through and is currently parked in this poor farmer's field. Stepping on the beans after someone has driven over them probably won't hurt them much. We cross over the muddy ditch and I just know they had to have been airborne at some point to get to their landing point. (And the particular client in the van happens to say "Wheeee!" every time we drive over a bridge, so I'm sure he thought it was better than a ride at Disney.)

Apparently when the tow truck got there, one of the back tires was off the rim and under the van. The wheel itself was completely bent underneath. The staff said it probably happened when he cut the wheel so sharply to try to make the turn. Because as we all know, anytime you make a sharp turn, the tires have a tendency to fall off, right?? I personally would speculate that it was likely that particular tire that our 15 passenger van landed on after it jumped the ditch. But what do I know? I just work here.