Helpful Hints from A Group Home

Remember Heloise? I used to enjoy reading her helpful hints in the newspaper. She always knew how to get that stain out, what ingredient could be a substitute for whatever you are lacking, and how to make your own laundry detergent. And now, I know I am no Heloise, nor am I Martha Stewart, but I've learned some decorating tips and useful household hints throughout my time in a group home. So turn off the HGTV and see what I have to share!

What do you do when you are chopping vegetables and can't find that pesky cutting board anywhere?? It's easy, just open the nearest cabinet, clear the closest shelf of whatever dishes might be residing on it, pull that shelf off of the pegs and Voila, you have a cutting board. How nifty is that?? 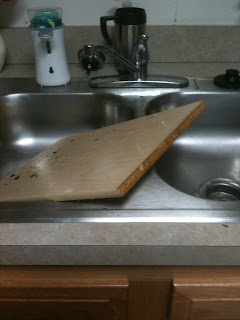 And what about when those cabinet doors seem to always be in the way. You just despise having to open one anytime you need to get something from the cabinet (a cutting board, maybe). Did you know you can just pull really hard on them and they'll pop right off? No need to worry yourself further with the task of opening and closing! 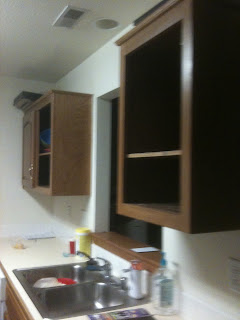 And how many of you have ever wished for new countertops? You visit a friend and they have new granite, someone else has beautiful tile. But you have ugly white laminate and really can't afford to have it replaced. Well do I ever have a solution for you! Grab a Sharpie!! It's amazing what you can do. 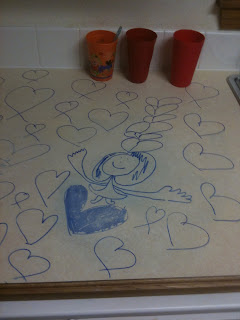 Okay, so I'm a tad embarrassed. December 15th was the last time I blogged? Can that be true? I mean, I know it's been a while, but really? Four months, wow!

And now the problem is, I don't even know where to start! Uh, so Merry Christmas and Happy New Year! I guess I have been in one of those blogging "funks" that I think most bloggers have from time to time. Life is happening, life is sad, life is funny, life is hard, life is wonderful, and you still just feel like there is not a lot to say, or at least not a lot of time in which to say it.

So nothing has really changed in our lives over the last four months, in which I haven't been blogging, but nothing ever remains the same either.

We think one of our guys is depressed right now. Or at least that's the psychiatrist's most recent diagnosis. I think it's like living with a colicky baby. He's crying ALL the time. And he's fed, and he's clean, and his schedule hasn't changed, and everything is in place that should be in place to make him happy. And yet he still cries. And I understand, though would NEVER condone, where shaken baby syndrome originated. Lowell and I have both learned that when we get to that point, we have to pass off responsibilities to the other person and go to the local bar for a stiff drink or two. (Just kidding about that of course, but it's a thought that's crossed my mind.) Here's hoping that the new antidepressant will solve the problem, and we'll have a little less screaming and a lot fewer tears, for all of us, not just for the resident Eeyore.

One of our guys knocked on the door a few weeks ago in the middle of the night, was holding his right side, and said, "Can you take me to the emergency room? I think I need my appendix out." And would you believe, he was right? So Lowell got to spend the whole evening and a good portion of the next day in the hospital with "Mr. I Know How to Diagnose Myself". He was released a lot earlier than they had originally planned. We are pretty sure it had something to do with the fact that he was continually asking for a meal and complaining that there was no Sci-Fi Network on the hospital televisions. When he started asking for video games and Microsoft points, they decided he was ready to come home. That was over three weeks ago. The surgery was laparoscopic, so the healing time was about 2 days. He went back to work this week. Talk about somebody MILKING an injury. Pathetic doesn't begin to describe it.

And then we have "Mr. My Short-Term Memory Gets Worse by the Second". The loops that he gets on could be scripted. We know exactly what he is going to say and when he is going to say it. And then he's going to say it again. He loves to talk about the weather. Any time you drive past one of those digital time and temperature signs, he will tell you the temperature over and over until we pass another one, and then he points out how much the temperature has changed. And the loop goes on. The first few times that he made statements like, "It's 50 degrees. Kind of cold for a Tuesday," we laughed. But we have since decided that hearing, "it's warm for a Friday" or "kind of rainy for a Thursday" just isn't that funny anymore. I've tried to steer him by saying, "yeah, kind of warm for FEBRUARY," but it's been to no avail. I give up. I remind myself that this is the same sports nut, who, the Wednesday after the Super Bowl, told us several times that they were having a huge parade in Green Bay because they like celebrating Wednesdays. Again, no use explaining that the residents of Green Bay aren't just big fans of Wednesday!

Anyway, that's pretty much life as we know it. Hopefully, I can get over the non-blogging funk that's had me down. I'm going to go turn the heat up. It's kind of cold here for a Thursday.
Posted by Queen of the Castle at 6:02 PM No comments: