The Draft in the Air

NFL Draft Weekend is a big deal in my house. Even back when Lowell and I were dating, I can remember that on draft weekend, I needed to have other plans. Or else I was sitting in front of the television for three days watching a bunch of college football players put on the designated baseball cap of their new team.

Over the years, I've come to a somewhat better understanding of what it's all about, even though I really think one could just read the picks in the paper the next day in about 15 minutes and not have wasted 6 hours the night before watching it live. But then again, I am certain I have spent time watching television programming that my husband wouldn't understand. So we just agree that Draft Weekend is a REALLY big deal and all the televisions in the house are his for three days.

I should have known the time was coming. Joshua was somewhat interested in the draft last year. This year the two of them are counting down the days, researching draft picks online, watching ESPN non-stop and centering a large majority of their conversations around who they think is going where. It's been some great father-son bonding time.

Thursday, April 22 at 6:30 pm is when it would all begin. And guess when the swim team awards banquet was scheduled. I don't even have to say do I? So for about three days, the big drama in the house was banquet or draft? Should we watch the draft live or DVR it with the great fear that some father at the banquet would be checking on his phone and spoil it all? Joshua's vote was draft hands-down. Lowell and I wobbled back and forth between, we really don't want to do to the banquet either, and he did make a commitment to the team and banquets are team functions, blah blah blah. I even posted a Facebook poll to get other opinions. (Most who voted, voted for the draft by the way). One person suggested asking him what he would be more likely to remember in a year, banquet or draft. He laughed and said, "Uh, draft!!!"

We had some staffing issues come up, and we were certain there would be no award for him, so we had a very happy little boy with his spread of notebook paper, snacks, and remote control in the living room. (And Lowell was glad to be watching the draft too, and I was glad not to be dressed up at a banquet, so all was well in our little world.)

Oh, but Friday rolled around and Joshua went to morning practice. He got in the car and handed me this: 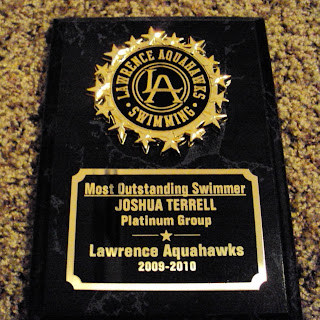 And I am thinking, well in one year he may remember the draft, and I will be remembering us NOT being at the banquet. And next year, I don' t care if they host the draft in our backyard, we WILL be at the banquet. (I mean, unless there is something on tv that I want to watch!)
Posted by Queen of the Castle at 3:42 PM