A Penny for your Thoughts

One of our guys loves money. All money. Dollars, quarters, dimes, nickels, pennies. All money. When working with him, we have to be very aware of our surroundings, because he will literally walk in the middle of the road if he sees something resembling change. He doesn't have a good understanding of the values, but he does know that the silver ones are more valuable than the copper, but that's never kept him from jumping out of the van to get the copper.

We recently had to call our maintenance department because our garbage disposal wasn't working properly. The guy came to fix it and pulled this out of the disposal: 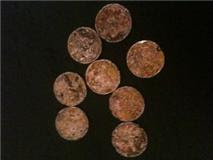 And it just blew our minds. We thought we had figured out who the culprit was though. Certainly not the money hungry one. Surely not the one who definitely knows better. It had to be the one who knew better but would think it was funny. So we talked to him and talked to him about how if it happened again, he would be responsible for the maintenance charges to get the garbage disposal fixed. And he swore over and over again that this was stupid and asked why on earth we would think he would do that.

Two days later, the garbage disposal is once again just barely humming. We reach in there ourselves this time, and again pull out a handful of pennies. This time, there were even more than the first time. And we notice that some of the pennies are more beaten-looking because they were the same pennies that were in there the first time that Mr. I Love Money swiped off the counter as soon as Maintenance put them there. He was the culprit!

So that's been our latest behavior issue. And although better than some of the other behaviors we've had to deal with, it still feels odd every time I say, "Now where do we put the pennies we don't want? Do we put them in the sink? Noooo. We put them in the jar right??" This has been mildly successful. And we have caught him recently just throwing them in the trash. And although I am not a fan of throwing any money away, at least we don't have to call maintenance!
Posted by Queen of the Castle at 8:40 AM