So, I read several blogs where the authors take a photo every day and then at the end of the week, recap the week using the photos - with explanation of course. The idea is that you are taking pictures and documenting your daily life. They call this Project 365. I think it's a terrific idea, but just felt like the task was too ginormous for me to even attempt. However, I was visiting with my friend Lori, who I must say does an AMAZING job of keeping up with her blog even though she has four little ones at home, and she convinced me to give it a try for just a week and see what happens. Keep in mind this might be a lengthy blog because I have so much explaining to do. So here it is.

One of our guys hasn't spoken to or seen his sister in over four years. We've tried to locate her, but to no avail. But out of nowhere she calls last week and wants to see him. She says she's so relieved to have found her "lost" brother. (Keep in mind that he has lived in the same town, being cared for by the same agency, and having the same phone number for 20 years. But he was the "lost" one.) Anyway, she asked for our staff to bring him to see her sometime over the weekend. We try and try to call to arrange a day/time but she doesn't respond. So on Sunday afternoon, our staff drives him to the address where she is staying. He calls one more time and she answers. When he tells her they are there she responds with, "not cool man, not &*^%#@* cool. But whatever, come on up."

So he's feeling real welcome about that time. But he goes in the apartment with the guy and sits on the couch. He then gets grilled about where we've had her brother and why hasn't she been able to find him. When he points out that she is the one who moved away, she drops that subject. Then she asks if she is the guardian. He said (being just weekend staff) that he wasn't sure who the guardian was. She jumped on him about why he didn't know. And he pointed out that it was her brother they were talking about and she didn't know either. He also told her that she would probably know if she were guardian as she would have had to sign papers and all.

Thinking it can't really get more uncomfortable, our staff was shocked when, as they were all sitting in the living room, the sister falls asleep on the couch. And then our guy falls asleep in his chair. So our staff is just sitting there in a stranger's apartment (a hostile stranger at that) and is the only one awake. He debates whether or not he should leave a note with his phone number on it and just slip out, but then decides that it probably wouldn't be leaving his client in the best hands. As soon as our guy woke up, he said he was ready to go home. To say our staff was relieved would be an understatement.

But before they left, she gave her brother a nice necklace. 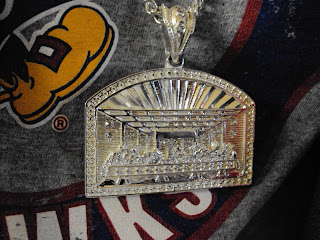 Because it just isn't a family visit until somebody leaves with some Last Supper bling bling.

This is what time my alarm clock went off this morning. Joshua has swim team practice at 5:15 am. I don't really think I need to add more to that. 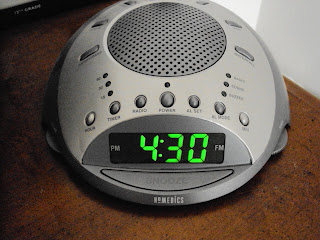 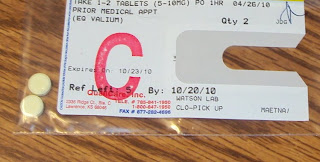 An appointment for a dental cleaning sounds like such a simple thing. I mean, I know there aren't many people who enjoy going to the dentist, but on the flip side, I don't know that there are many who require a couple Valium just to keep from beating the dentist up. I do happen to know one person who does though and I had the distinct pleasure of going with him today.

He goes to a pediatric dentist and unfortunately, the waiting room was full. I say unfortunately because I am betting the dentist lost a lot of business today. For almost an hour, there was a grown man (who was a tad loopy) showing everybody in the room his teeth and telling them that he was getting them cleaned. (Imagine a hippo yawning in your face and you'll have a good mental picture.) And then he was called back - I'm pretty sure we didn't have to wait as long as everybody else.

He sat in his chair and they leaned him back and the kicking and screaming started. We got it settled down pretty quickly. Not quickly enough for the three youngsters who looked completely horrified. I am thinking that when they planned for the big "all the children will get their teeth cleaned together" room, they weren't imagining this particular scenario. For certain today, they wished they had a separate, soundproof room. Especially when he yelled his infamous, "Need a bafroom. Ima pee myself!" (At least he didn't ask for a bucket...) I assured the hygienist that this was just a stall tactic and that she should continue on. She was nervous but took my word.

When she finally finished the cleaning, we waited for what seemed an eternity for the dentist to do his check. He asked me if were brushing his teeth for him at least once a day. Seriously?? I tried to explain that he isn't really down with that. He says, "He seems to be okay now with us doing it." And I explain that it's not him who is okay, it's the Valium talking. And he says, "Then just do it when he's asleep. You don't need toothpaste or water, just get a dry brush and brush them really good."

I just nodded and said we'd try that. But really???? Who isn't gonna wake up when somebody sticks a toothbrush in their mouth? And this isn't just anybody we are talking about. We are discussing doing this to someone who we already KNOW to be psychotic. But then again this is the dentist who has been known to share his ludicrous ideas with us in the past.

This is a picture of a pretty much everyday occurrence around here. You walk over to the guys' side of the house, look on top of the refrigerator and this is what you see: 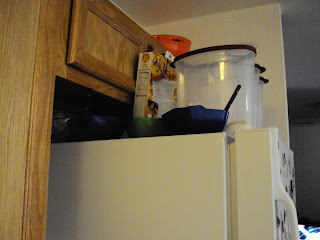 Bowls. And they have food in them. Gross, right? One of the guys will finish eating but thinks he may want to come back for it later and sets his bowl on top of the fridge. And it's especially difficult for me because, as those of y'all who know me personally know, I'm not quite tall enough to pull things down off the top of the fridge without the threat of spilling it on my head. And A LOT of the time, the contents of said bowls are cereal and MILK, which is a whole other story because this particular guy doesn't think he has enough milk until the bowl is full to the very brim. (And it's just bowls, never plates. Odd huh?)

So I try and try to have conversations about not putting our bowls on top of the "icebox" and it makes me laugh every time I say, "When we are done with our food, we put bowls in the sink and not the icebox" because the only other people I've ever known to say "icebox" were my grandparents. And this guy isn't nearly as old as they are/were.

So I walk out to go get into the van to pick up one of our guys and this awaits me. I stop for a minute and just watch before I realize I need both Lowell and a camera. I need Lowell to help resolve the situation and the camera to document what was going on. 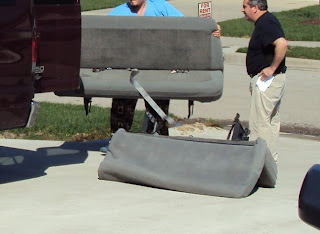 These seats are HEAVY. And I mean heavy. Lowell and I have attempted to take them out of the van once before when we needed to make more room to transport something. And the two of us together failed miserably. But not this guy. And he didn't even have a valid reason for removing the seats. He said that one of them was broken and he didn't like to sit in it. (We've never noticed the brokenness, but hey, whatever.) So he had to take all three seats out to rearrange them. I had to leave before he could get seat 3 back in. Once he was done, he was done. He's not really willing to put seat 3 in now. Says it's too much work. So seat 3 is in the garage and this is what the van looks like now. And, yeah, it's a little awkward to ride in the back and have that much room between you and the driver. But you know, it's not a battle worth fighting. 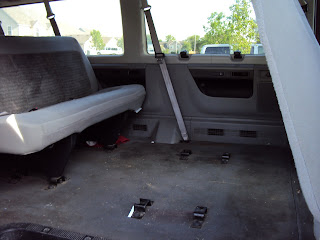 Joshua got an iTouch. He loves it and so do I. I have been coveting an iphone for some time. This is working to appease that desire for now. Since he bought it with his own money, I usually have to wait for him to go to bed to use it, but that's okay. It was free for me, I don't mind the wait. Lowell doesn't get the appeal. He doesn't understand why I get so worked up playing Angry Birds or Dogs Playing Poker. He thinks I should try to do something to relax before bed. He refuses to play, so he will never understand. (And I certainly don't push it on him. If he got addicted too, I might never get my hands on it!) 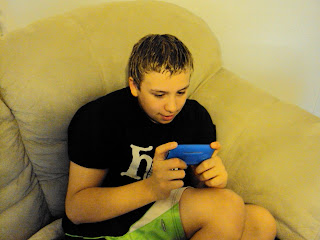 I spent all day on Saturday here. 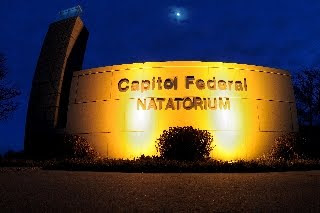 I forgot my camera so copied this picture off the internet. I have to say that it is appropriate that the picture was taken in the dark however. We arrived at this swim meet when the sun was coming up and we left when it was going down. Need I say it was a loooooonnnnnggggg day for me? It was ridiculous really. I gained a whole new respect for coaches who have to stay at the meet all day, but then again, they are watching lots of swimmers. I was watching ONE. He was in the water a grand total of 13 minutes 47 seconds. I was sitting by the pool (on hard bleachers) for 10 hours. Actually we did leave for 20 minutes to grab lunch and I sat in the car for about 45 minutes. So maybe it was only 9 hours on the bleachers, but you get the drift. Not a fun day for this mother.

So there ya' go. My week in a nutshell. It was kind of fun finding things about each day to photograph. Not that I'll be doing that regularly, but maybe every now and then we can get a week in pictures.
Posted by Queen of the Castle at 4:30 PM

That dentist is a weirdo.

Man, swimmers and their early mornings...Y'all picked the wrong sport!! (I know how much you value your sleep.)

Again, I really loved this post. You should keep it up!