The guys qualify to order food from a local food bank so we go about once a month and get groceries there. Last month, we saw "Buttery Garlic Whole Chicken" and thought, that sounds good and easy. We'll order that. Had we been paying attention to the extra detail out to the side we probably would have noticed that it said "42 pounds of chicken." When I opened the box, there were eight whole buttery garlic chickens completely frozen together. Knowing that once they defrosted, I would have to cook them all, I sincerely considered just throwing the box away. BUT that would be wasteful and we wouldn't want to be wasteful. We decided that it would be easier to just cook them all and then we could refreeze the meat for later use.

So Joshua and I took on the task of a chicken-cooking day. All was going well until he was called to go to a friend's house and boy did he ever jump on that offer. (Not that I blame him). We had chickens everywhere. 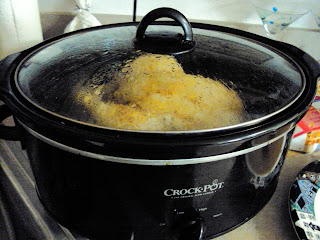 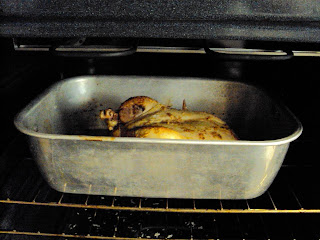 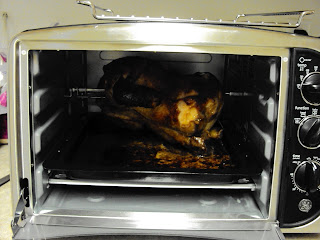 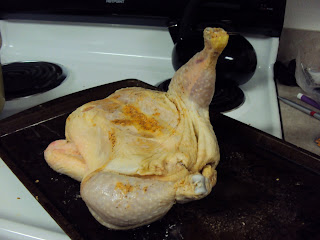 And then there was this guy. I guess rigor mortis set in early for him. He was totally stuck this way, doing his high kick. He had to wait for the oven to free up because he wouldn't fit in the crockpot with his leg up and he wouldn't turn in the rotisserie. (Once cooked, his leg did lay nicely.)


We had Chicken Spaghetti, Chicken and Dumplings, Chicken Fajitas, Chicken Quesadillas, and we still have four more chickens in the freezer. I'm thinking we'll pay closer attention to what we are ordering next time!
Posted by Queen of the Castle at 3:50 PM