Are We in Camelot??? 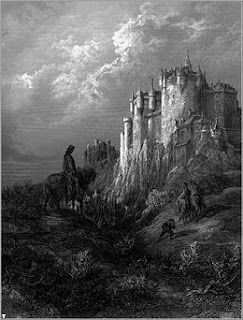 On Tuesday of this week, (which by the way, should have been a good day as we seem to be on an every other day rotation) things started off with a bang. Literally. When I woke up and went next door at 7 am, I heard a banging coming from one of the rooms. I guess that was the first sign it wasn't going to be a good day.

Mr. Pop/TV/Rearview mirror guy normally comes out of his room with a smile, ready to take his morning medications and get his two dollars. He normally controls the behaviors relatively well until after the two bucks are in his wallet. This particular morning, I guess he woke up and decided he would rather hit some walls first.

After a few quick calls and texts to some backup help, I decided to try to divert attention to more positive activities, like maybe making breakfast. That worked long enough to get the meds down and breakfast checked off the list. Then, as you can probably guess if you've read older posts, as he was walking to his room and passed the TV, it got a good shove and landed on the floor. At this point, I decided to head back to my side of the duplex and watch the action from the half door while I made some phone calls. He pulled off the thermostat (we are constantly looking for the thermostat after these episodes - anybody else have that problem??) and then went to work on the doorbell. It was affixed pretty well, so it took a while to get that pulled off the wall, which was cool, because it bought us some time. While one staff member contained him in his room, Lowell and I went through the downstairs making it childproof. This means going ahead and making sure the furniture is already turned over, the remotes and phones are put away, the one decorative item in the house is in a cabinet, all the knobs are off the stove, the kitchen table is pushed up against the wall, and all of the chairs are in the garage. Once this was done, we were just going to let the bull out of the pen and act like the rodeo clowns trying to keep the rider as safe as possible. As we are thinking the medication should kick in SOON and bring some calm to the storm, the guy who "doesn't do stairs very well" charges upstairs to his housemates room. Staff yell out for him to lock his door, which he does, but then he quickly changes his mind too.

The next thing we know, he comes out of his room with a huge sword (which we later realized was plastic but looked real), gets up in the guy's face and yells "Get the (we'll say 'heck' to keep the reading censored and family friendly) out of my room!!!" And that was all it took. I guess that is what we call natural consequences, because he quickly comes back downstairs, begins to chill and asks for help cleaning up.

The Knight in Shining Armor carried about three swords around the whole day. And even though they were plastic, he didn't get messed with anymore.
Posted by Queen of the Castle at 12:58 PM