We have rocked along for almost a week now with no major problems. Minor yes, but those can be dealt with. Status quo changed this morning. Mood was a little up and down, but not too bad until he went to get a glass of water (or maybe I should say a plastic cup of water, because as you can probably guess, we try not to have anything glass in the house). All of a sudden, everything in the kitchen starts flying. I immediately call my supervisor for backup help while Ms. Cornstarch tried to calm him down.


We tried every distraction possible, but couldn't persuade him to do anything but continue to curse at us and throw things. Luckily, his aim is terrible. He flipped over the kitchen table and pulled down the curtains (which are velcroed to the wall - how ingenious is that for a house like ours??) Of course the tv went down. But this time, he didn't stop there. He ripped the cable out of the television and it stripped down to the wire. Along with the cable came the little piece that the cable attaches to, so it looks like a new television is in our future. Next came the microwave. We no longer have a handle. I'm not sure what that means for the microwave, but I am thinking it means we'll be getting a new one. (If you need new stuff, just let me know and I'll send him over. All you have to do to set him off is ask politely if he would like to change his jeans...) 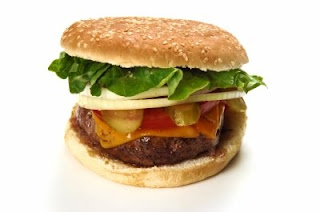 Well then things got crazy. The other stuff had been fairly par for the course, but then he goes into the kitchen and emptying drawers of silverware and other utensils. Next he opens the freezer and pulls out a five pound frozen hamburger log. And he chases us around acting like he is going to throw it at us. Even at the time, we were laughing at the idea of that obituary - killed when hit in the head with frozen hamburger.


One thing we did notice today is that he did not even attempt to run upstairs to Camelot. Maybe we should all arm ourselves with plastic swords...
Posted by Queen of the Castle at 1:55 PM